These two terms would seem to mean the same thing—but they don’t! The boreal forest is the wooded country of the far north, stretching from Newfoundland and Labrador to Alaska. It has an Old World counterpart in the vast taiga of northern Europe and Siberia, although the tree species are not the same. We often hear of the boreal coniferous forest, and this is true to a degree; the dominant trees are white and black spruce and, mostly east of Hudson Bay, balsam fir.  But there are also expanses of birch woodland, aspen, and cottonwood, as well as enormous peatlands, largely devoid of trees, that are often called muskeg in Canada.

In the Northern Rivers Land Trust area, boreal forest is at its southern limit, and it occurs mainly along ridgelines above 2,000 feet or so, like the Lowell Mountains and Woodbury Mountain, and in cold hollows and valley floors such as Bear Swamp, in Wolcott. You can walk into these areas and, within a few hundred feet, be hard pressed to distinguish the ecosystem from that of southern Labrador—especially since the return of the moose!
In the sense that the term is usually used, the northern forest is found mainly in northern New England, New York State, and in adjacent Canada. (This latter is demonstrated by the fact that the Province of Quebec makes several times more maple syrup than all the New England states together.) The idea of the Great Northern Forest has gained a good deal of traction in environmental circles, as the northern states have begun to work together to protect what is the defining ecosystem of the region. 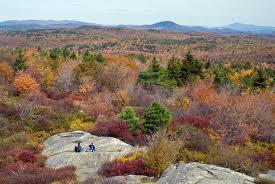 We often talk of the northern hardwood forest. This is no more an accurate description than boreal coniferous forest. Many of the characteristic trees, and woodland types, of the northern forest are coniferous. Great stands of white pines dominate the drier uplands and are interspersed with beech and maple. Ancient hemlocks shade the moist valley floors, and white cedar wetlands occur wherever the substrate is not too acid. Still, the most characteristic trees are deciduous, flowering hardwoods: sugar maple, red maple, beech, cherry, birch, and, mostly south of our area, red oak.
The northern forest of the Adirondacks is cut off from that of New England by the Champlain Valley, whose oak and hickory-rich woods have a more southern affinity—with the Appalachians and the Ohio River Valley. And the St Lawrence lowlands create a similar situation between the US and southern Canada.
The boreal forest is always under a certain amount of economic pressure for the production of paper pulp and construction lumber—as well as peat for the horticultural trade. There are still enormous portions of Canada and Siberia that are untapped, and our local boreal forest tracts tend to be small and difficult of access, although industrial wind projects put the ridgeline ecosystems in grave danger. The recovery rate of a lowland boreal forest tract is surprisingly rapid. Fifty years after a logging operation, it is often hard to find evidence of the harvest, and there are many natural kinds of disturbance, such as fire and insect damage, that have always been part of the equation, and which the forest takes in stride.
The northern forest, on the other hand, is a resource unique to our part of the world. When you see cherry or maple cabinets in high-end kitchens in England, you know that the lumber or veneer originated within, at most, a few hundred miles of us—it can be found nowhere else. And the northern forest seems to have much less tolerance for alien insects and diseases. The American chestnut, which was extirpated by the imported chestnut blight in the early 20th century, occurred mostly to the south of our area. But American elm was once a significant element of the northern forest, and the last isolated remnants in our area are succumbing to the dutch elm disease. It’s hard to find a healthy and unblemished beech tree, and our wonderful, towering white ash trees, as well as the black “basket ash” of the swamps, are in deadly danger from the emerald ash borer, which seems to be making its way inexorably from the Midwest.
The hardwood forest is slow in reclaiming its original habitat here in northern New England. Fields that were abandoned well over 100 years ago still often support mainly old pasture spruce, ragged red maples, and straggling grey birch, mixed with goldenrod and hardhack. It will be many generations, if ever, that there will be extensive areas of anything like old growth hardwood forest in the Northern Rivers area. There are a few places where we can get at least an idea of what it would be like. It’s worth encouraging their protection and expansion, even if we ourselves will never see the result.
Posted by anni at 5:21 AM